I will never forget a few years ago when a woman told us that she wanted to groom her dog herself because he had gotten some pretty bad mats, but she felt like the clippers she had wouldn’t do the job. So she was going to try to use an X-Acto knife.

I’m going to take a bit of a breath and let that one settle in. I don’t know about you, but I cringed when I heard that.

Look, I’ve seen just a plain old pair of scissors do some real damage to a dog’s skin. I cannot imagine what the slip of an X-Acto knife could do.

Over the years at CVAS, we’ve had pups and even cats come into the shelter in rather desperate need of grooming. Shih Tzus with big clumps of hair pulling at their skin; long-haired cats so tied up with mats they could barely stretch their legs out completely.

It’s important to remember when bringing home an animal that requires grooming – or at least consistent brushing – that you need to be diligent in keeping up with the task.

Dogs with the long coats – Shih Tzus, cocker spaniels, King Charles spaniels, poodles, Afghan hounds, pekingese and bichons are just a few – really do require constant attention to make sure the coat is kept well-groomed. The results, if left unattended, can actually be quite severe.

I will never forget the day we arrived at the old shelter on Country Road to find two cocker spaniels in the outside run, so terribly covered in mats they were almost unrecognizable. Their ears were in such bad shape, even with their heads up, the tips of the mats dragged on the ground. Keep in mind, they were standard cocker spaniel size, so we’re talking about mats of hair that were about a foot in length.

The clumped hair had all sorts of debris and – I’m sorry to say – flies had actually laid eggs in it and there were maggots deep inside.

It was as though they had two bricks attached to their heads. It was years ago, but that image still haunts me.

Severely matted fur actually doesn’t allow the skin to breathe. An animal’s skin needs air, like ours. Indeed, a human’s skin is considered the largest organ in the body because it has specific functions as other organs do. Sweat leaves the body through our skin and a number of lotions, medications and essential oils can be absorbed through the skin.

The same is true with our pets. Granted, they don’t sweat like we do, but their skin is similarly absorbent.

When the skin is covered by huge clumps of hair over an extended period of time, it’s deprived of oxygen and can develop serious lesions and sore spots – some of which, if severe enough, will need immediate medical treatment.

One of the most heartwrenching sights I’ve ever seen was the day we cleaned those poor cocker spaniels of all those mats. They ran and ripped around the yard as though they were young pups. The freedom of losing that confinement must have been amazing.

Please, if you’re considering adopting one of the breeds that needs to be groomed, have a plan in place. Many owners groom their dogs themselves. If you want to attempt the grooming yourself, please, be careful. Scissors can cut skin quicker than you can blink, especially if a pup moves suddenly. Even a pair of clippers can burn the skin if you get too close.

We do have a lot of wonderful groomers in the area who will take very good care of your four-legged baby if you’d rather go the professional route.

Just please, whatever you do, don’t use an X-Acto knife.

We’ve seen far too many animals come into the shelter with horribly matted fur when they could have been fixed by a simple trip to the groomer.

I’m a firm believer in word-of-mouth. The best way to keep things from happening is to talk about them. So if you have a friend looking into adopting a Shih Tzu, or other breed that needs to be groomed, tell them the tales that we’ve seen at CVAS.

Heck, tell the tale with a friend even if he or she has a beagle – maybe they’ll know someone who wants a cocker spaniel and can share the cautionary tale.

The more we talk about it, the better chance we have to keep it from happening.

And if that can save one more poor, matted-up cocker or Shih Tzu or long-haired cat from experiencing that condition, it’s well worth the conversation.

Jennifer Vanderau is the Publications and Promotions Consultant for the Cumberland Valley Animal Shelter and can be reached at cvascomm@cvas-pets.org. The shelter accepts both monetary and pet supply donations. For more information, call the shelter at 263-5791 or visit the website www.cvas-pets.org. CVAS also operates a thrift store in Chambersburg. Help support the animals at the shelter by donating to or shopping at the store.

The Court is announced

This Week at Waynesboro Theatre: Oct 6-8

Staff ReportsOctober 3, 2022
Around The Region 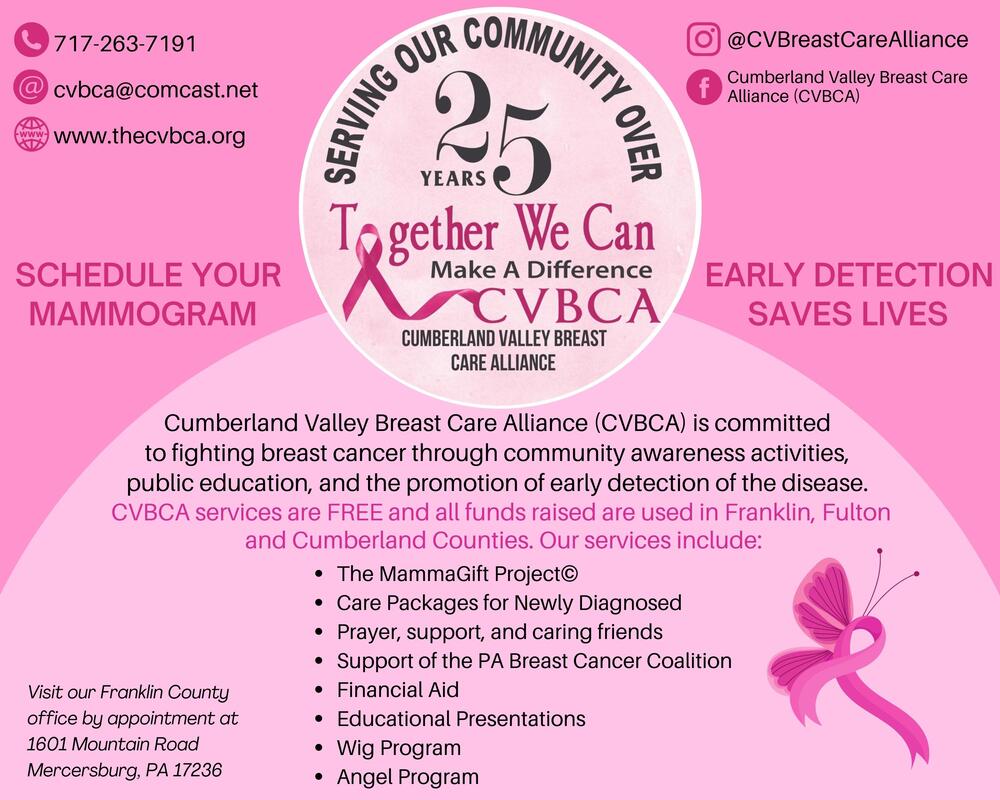